The honorable guests were greeted by Mr. Shafqat Bashir, President and members of PCBC. Some 50 guests were in attendance, including members of the Chamber, Quebec government, bank officials and businessmen. The meeting was Call to Order by Mr. Adnan Shah, Master of Ceremonies.

Mr. Shafqat in his welcome address thanked His Excellences, the Mayor for their interest and time as he welcomed the guests in the annual dinner. In his opening remarks, he cited the contributions of Pakistani businessmen to the Canadian society. He also mentioned the activities of PCBC and how Chamber has been helpful to the community by bringing them on a platform, holding exhibitions and introducing Pakistani products to the Canadian consumers.

Mayor Mr. DeSousa acknowledged that among 5,000 various commercial organizations, Pakistani business community has played an important role in the city, the Province of Quebec and Canada at large.

H.E. Consul General of Pakistan, Mr. Aamer spoke of the importance of trade with Canada, and assured the Chamber members of his full support as and when required. He stated that the bilateral trade between Pakistan and Canada was 1.4 billion dollars in 2016 and there is lot of potential to grow it further. Also, with the advent of China–Pakistan Economic Corridor (CPEC) project, there would be greater opportunities for Pakistani goods in Canada and the rest of the western hemisphere. He added that Pakistan economy is growing at 5.3 percent of GDP annually, and offers great chances of investment for the business community. He also thanked the High Commissioner for the positive role he has played in promoting economic relations between Pakistan and Canada.

H.E. Mr. Calderwood then addressed the Chamber and provided the Canadian perspective of Pakistani commercial activity. He advised the Chamber of Pakistan’s challenges i.e. energy shortage and security issues. He acknowledged the development of democratic process in Pakistan with the recent peaceful transition of power and the change of government. He said that he was very optimistic about the future of Pakistan, and would soon become self- sufficient in its energy requirement.

Many questions were raised by the audience. He assured that anyone visiting Pakistan to promote trade into Canada may get his personal assistance. On the question of delay and non-issuance of business visas, he assured that visas for Pakistani business people are fairly dealt with, from among thousands of application every month. He also promised to host any PCBC trade delegations to Pakistan.

The Chief Guest was presented with a Shield by the President Chamber. Later, all guests cut the 1 st anniversary ceremonial cake to mark the occasion. The honorable guests of honour mingled with the other guests during the dinner, served at the end of the meeting. 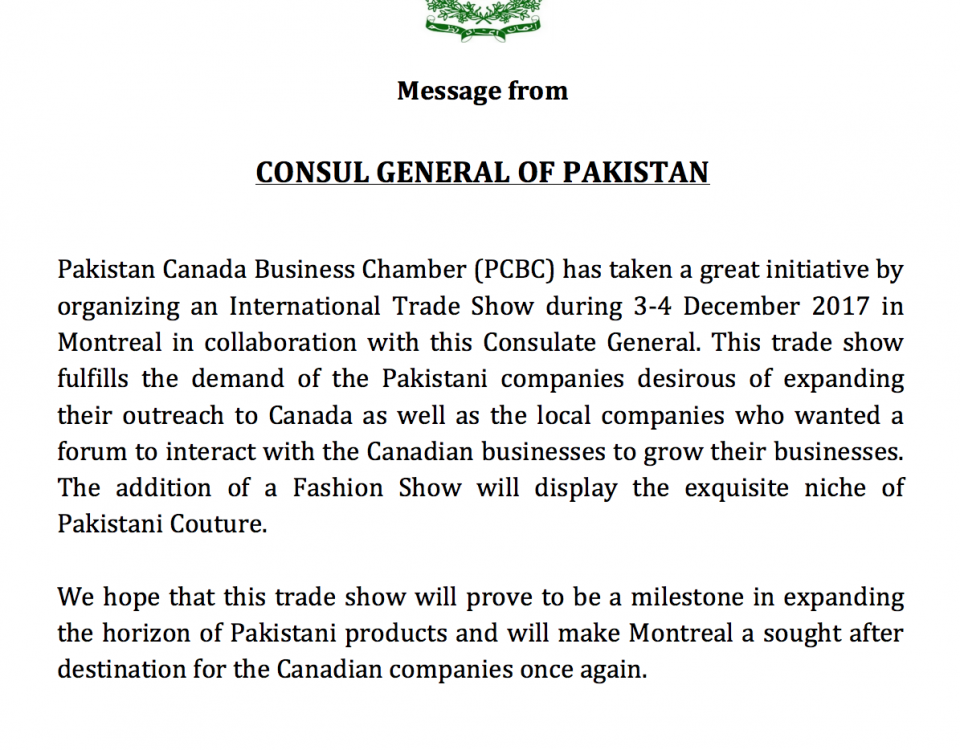